A fast flowing stretch of the River Conon between Loch Luichart Power Station, the river’s confluence with River Meig, sweeping down to a weir at the top of Loch Achonachie. Considerable influence of power generation affecting flow rate and safety when wading is essential.

The south bank of the Upper Conon is best reached via the A832 leading from the village of Marybank to the top of Strathconon. There are various access points for vehicles along the river on this bank with the main one to South Number 1 Beat to be found 4 miles from Marybank through a padlocked gate – details of access available when you collect your permit from Contin Filling Station in Contin village on the A835. South Number 2 Beat can be accessed along a track a further mile up the road towards Scatwell. Access the North beats 1 and 2 from the road that runs alongside Loch Achilty (turn left when heading out of Contin towards Ullapool) and on to Luichart Power Station the beats are clearly marked and both have fishing huts. 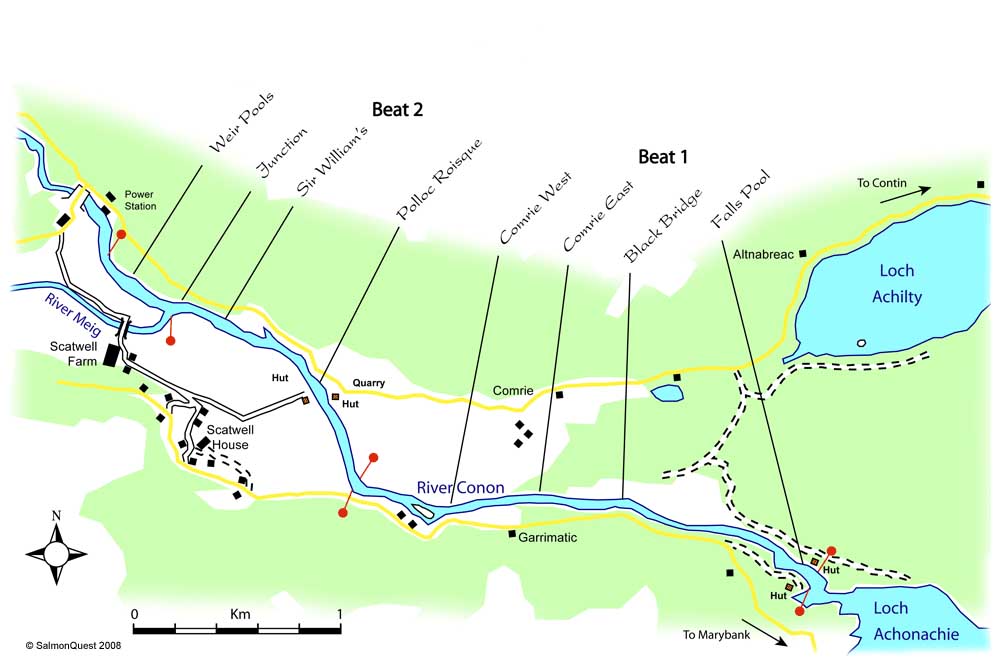 The Upper Conon is fed by the river Meig and the outflow from Loch Luichart power station. There are four main beats, two on the North bank and two on the South bank. All four beats have huts for shelter or to take a break and at No 1 beat North, there is a level concrete walkway with railings, approved for use by disabled anglers. The Club waters run for over 2 ½ miles from the confluence with the river Meig and where it enters Loch Achonachie. Detailed maps of the fishing are shown below. It is worth remembering that the water levels of the river can rise very suddenly due to electricity generation at the power station upstream.

Spring salmon from May onwards (dependant on water temperature) with more fish arriving from late June until the end of September. Salmon average 6-8lbs but recently fish of a larger stamp have been taken- up to 18lbs in weight. There are also good quality brown trout averaging ¾lb in weight but there are bigger fish. In addition, Pike and Perch can be caught – particularly in the lower part of the river where it runs into Loch Achonachie.

Fly fishing and spinning are allowed, but no bait fishing whatsoever. Spinning is only permitted when the level is high and the flow is fast due to electricity generation. Bank fishing only but care should be taken if wading. For safety we recommend you wear a buoyancy aid and have a wading stick.

Use traditional low water salmon flies (sizes 8-10) in the early months with Stoats Tail, Silver Stoat, Teal Blue and Silver, Green Brahan and Blue Charm catching fish. From July onwards, the more lurid colours and patterns start to work with Cascade and a variety of Ally’s Shrimps being among the best. When the water is high, spinning with standard Tobys and Flying Cs can be successful. We ask all anglers to adhere to the Club’s conservation policy and adopt catch and release as much as possible. Please note that fishing with barbless hooks is mandatory on all Salmon waters during September.