A deep natural loch over 1.7 miles (2.75km) long in remote and wild highland country – 476ft (145m) above sea level. The loch is reached passing Loch Meig and travelloing further up the strath.

Approach from the A832 Contin/Gairloch road. Turn left at 26/450567 onto the minor road. After one mile you will reach Loch Achonachie on the right. Carry on this road for another three miles and you will reach Loch Meig. Carry on past Loch Meig up Strathconon to the top of the loch. The boats are located just opposite the layby at the end of the public road and are clearly signposted. We are pleased to announce that fishing is now available on both banks of the Loch. 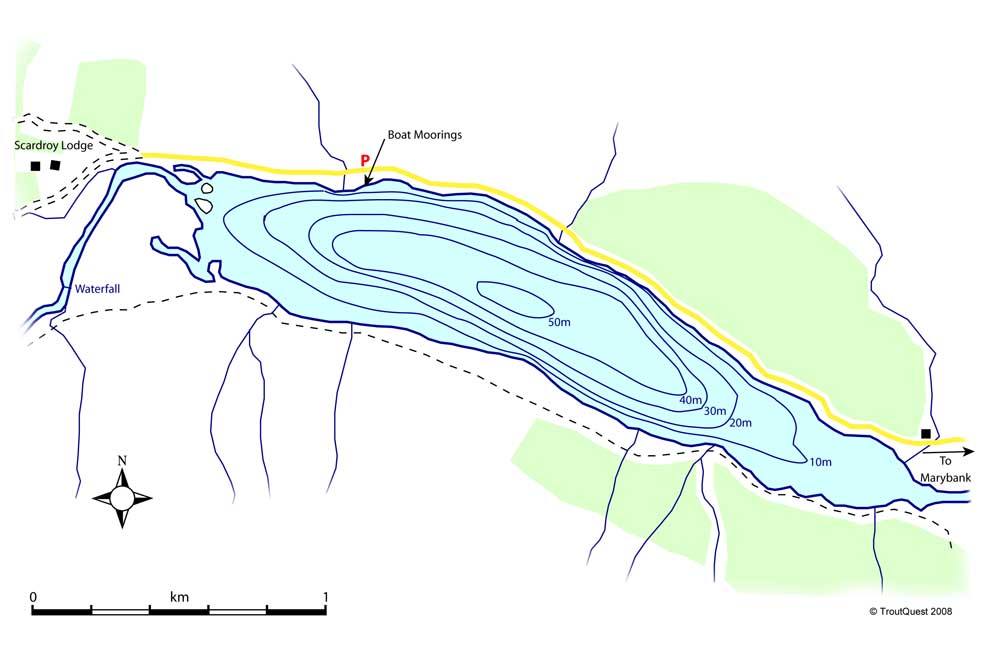 Loch Scardroy lies on the course of the River Meig and although it is part of the Conon Hydro-Electric scheme, it is a natural loch with no dam. It is a large body of water over 1.5 miles long, approximately 450 yards at the widest point, and more than 50 metres deep. The surrounding hills to the east and west form a natural wind tunnel and the loch can often be wild and stormy. An outboard motor and drogue would be essential if boat fishing.

Predominantly good quality brown trout (of Loch Leven descent) average ¾ lb in weight but there are bigger fish. There are Arctic Char in the depths and ferox trout which feed on them.

Salmon enter the loch from July onwards but as per Fishery Board rules, these must be returned unharmed.

Fly fishing and spinning are allowed on this loch, but no bait fishing whatsoever. There can be good sport from the bank but boat fishing gives the most productive results. Fish can be taken all round the margins where the shelf drops off or next to the weed beds at the top of the loch where the river enters. There are isolated patches of weed in a few of the bays going down the loch also and these hold fish.

Use traditional wet flies in the early months with Greenwells Glory, Black Zulu and Black Pennell being among the best. From July onwards, larger lures can work well on the point with Pearly Pennel, Heather Fly and Heather Moth on the dropper. As with most other Highland lochs, Buzzers can be good any time of year but you will have to vary the depth and colour to find the right combination. Small black hackled spiders with a red tag (some with palmered bodies) fished in size 16 and smaller can be effective.