A beautiful stretch of pure highland river tumbling out of Loch na Croic through both fast but deep runs and some slow stretches, and on down to the spectacular Rogie Falls..

Approach from the A832 Contin/Gairloch road. To fish the North beats, go through Contin and just before bridge over the river, turn right onto the short road which leads on to the forestry track. After two + miles you will reach the start of the Club beat on the North side above Rogie Falls. 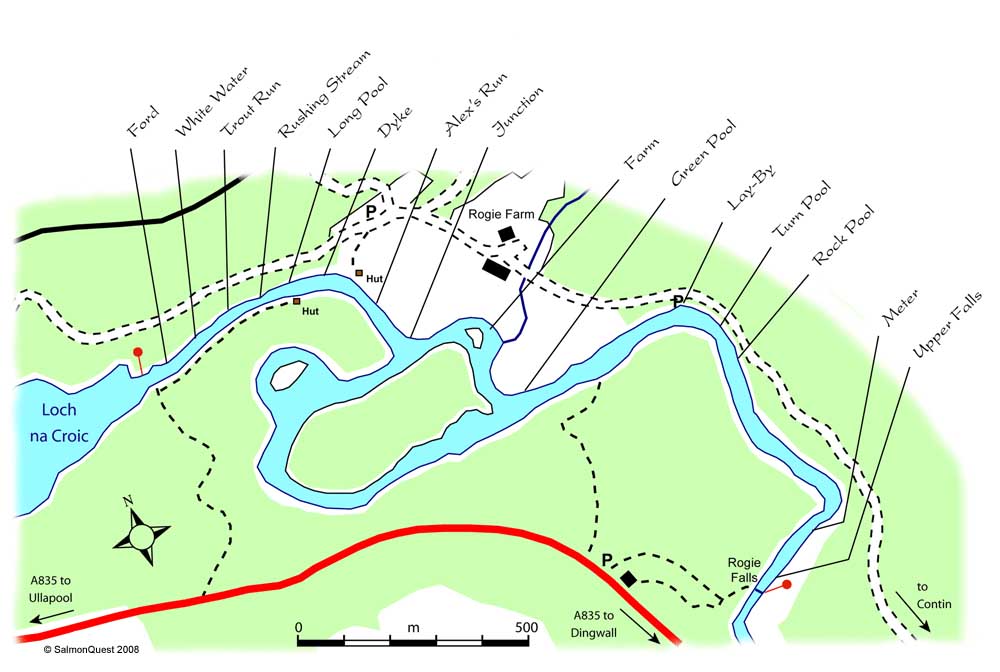 To fish the South side, carry on through Contin on the A832 until you reach the signposted car park for Rogie Falls on the right hand side. Park there and there is a forest path just past the entrance to the car park which leads down to the Green Pool on the river.

The Upper Blackwater flows out of Loch Garve down a short stretch into Loch na Croic. The outflow from Loch na Croic marks the boundary of the fishing on the river Blackwater. From the outflow to immediately above Rogie Falls is the extent of the Club waters - totalling 1 ¼ miles. There are 9 Rods permitted any day during the season and fifteen named pools or runs allow tremendous variety of river fishing in beautiful surroundings. There is one hut for shelter on each side of the river or to take a break. A detailed map of the fishing is below.

Spring salmon from May onwards (dependant on water temperature) with more fish arriving from late June until the end of September. Salmon average 6-8lbs but recently fish of a larger stamp have been taken - up to 14lbs in weight. There are also good quality brown trout averaging ¾lb in weight but there are bigger fish – particularly in the deeper waters at the Green Pool where brown trout in excess of 5lbs are frequently caught. In addition, there are large Pike – particularly in the slower and deeper parts of the river.

Fly fishing and spinning are allowed, but no bait fishing whatsoever on any of our waters. Spinning is only permitted when the level is high and the red markers are covered. Bank fishing only but care should be taken if wading. For safety we strongly recommend you wear a buoyancy aid and have a wading stick.

Use traditional low water salmon flies (sizes 8-10) in the early months with Stoats Tail, Silver Stoat, Teal Blue and Silver, Green Brahan and Blue Charm catching fish. From July onwards, the more lurid colours and patterns start to work with Cascade and a variety of Ally’s Shrimps being among the best. When the water is high, spinning with standard Tobys and Flying Cs can be successful. We ask all anglers to adhere to the Club’s conservation policy and adopt catch and release as much as possible. Please note that fishing with barbless hooks is mandatory on all Salmon waters during September.